What do you think of when I say ‘country music’? If you’re a Brit, it’s probably cowboys, yee-ha’s and this mystical land that appears stuck in time called Nashville. First to mind probably won’t be the magical storytelling, ethereal melodies and a dreamy musical language that speaks universally to the soul. And that’s a shame.

I love country music. And when I say I love country music, I don’t mean it in the geeky, I know all about country kind of way. I wish I did mean it like that, but sadly I haven’t researched into the genre as much as I should. My experience of country is Jolene, the Brit twins Ward Thomas and early Taylor Swift. A very commercialised experience of country I realise, but it’s country nonetheless. And it’s this music that spurred me on to write my own songs a few years back – songs I’ve still not let anyone see – and this genre also continually inspires my thoughts, dreams and creative writing. 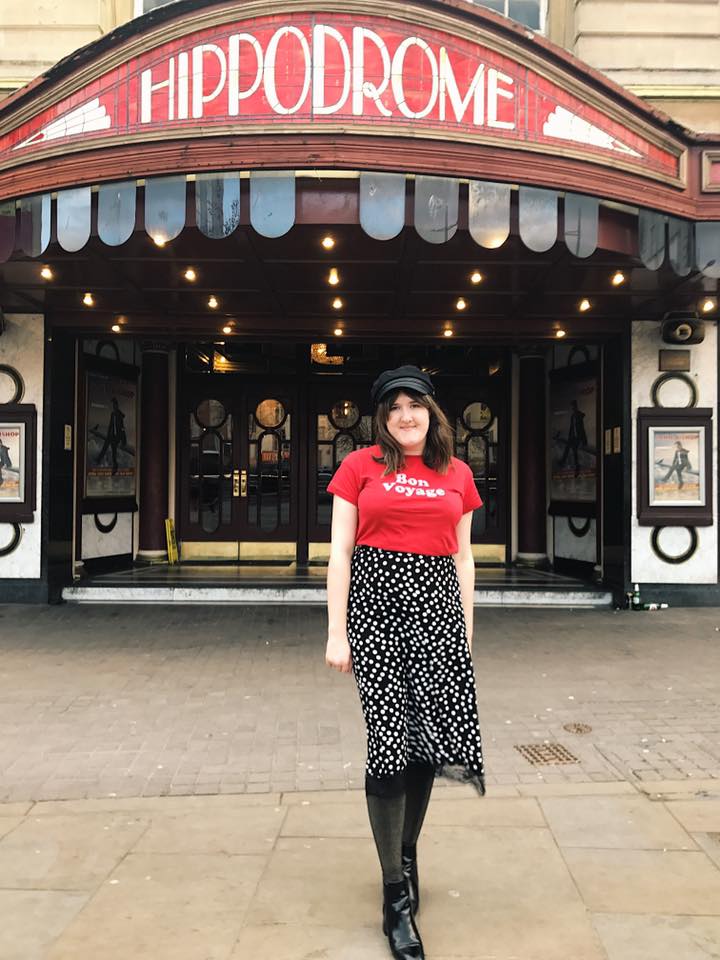 A v nervy me before the interview

Country is a beautiful genre of music that gets highly overlooked in the UK. A niche of its own, reserved for those that revel in its beauty quietly, country music hasn’t been brought to the forefront quite the same since early TayTay graced our ears- and even Taylor has shed her country skin to become a cheap knock off version of her former, hugely talented self.

Can you tell I’m a little bitter that country doesn’t get its airtime over on UK soil? No?

Anyone that sticks to their country guns in this era of pop and all things grime, dubstep and RnB is a winner in my eyes- and that’s why I was mega excited when I got the opportunity to interview Sarah Darling, literally country’s voice of an angel. 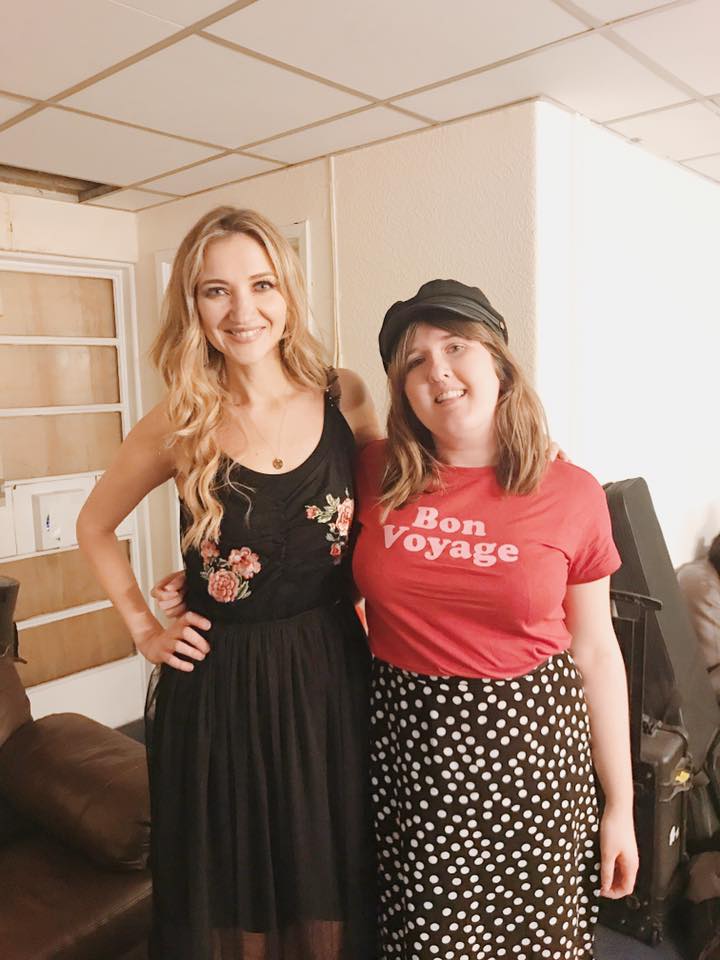 Last week, I headed down to Bristol to visit Sarah backstage at The Lantern in Colston Hall, where she was warming up n dressing up for her headline gig- the last gig on her very first UK headline tour! Graceful, warm and oozing the laidback vibes of her life back in Nashville (I’m v jel) Sarah was a pleasure to chat to. On stage later that night, she was an angel to watch, with perfect vocals and a presence that enraptured her audience. But more of that later, because it’s time for our chinwag first.

A little in awe of the woman herself, I was desperate to find links between myself and Sarah. And she loves Bristol, which obvs makes us best friends, as every time I visit my boyfriend down there, I fall in love with it too. “Bristol is an amazing place- I wish I had more time to visit it.” Sarah sighs. “It’s funny- I haven’t been able to see much of Bristol this time, but I have been here before! I came here for an Americana Festival last year and actually got to walk around.” 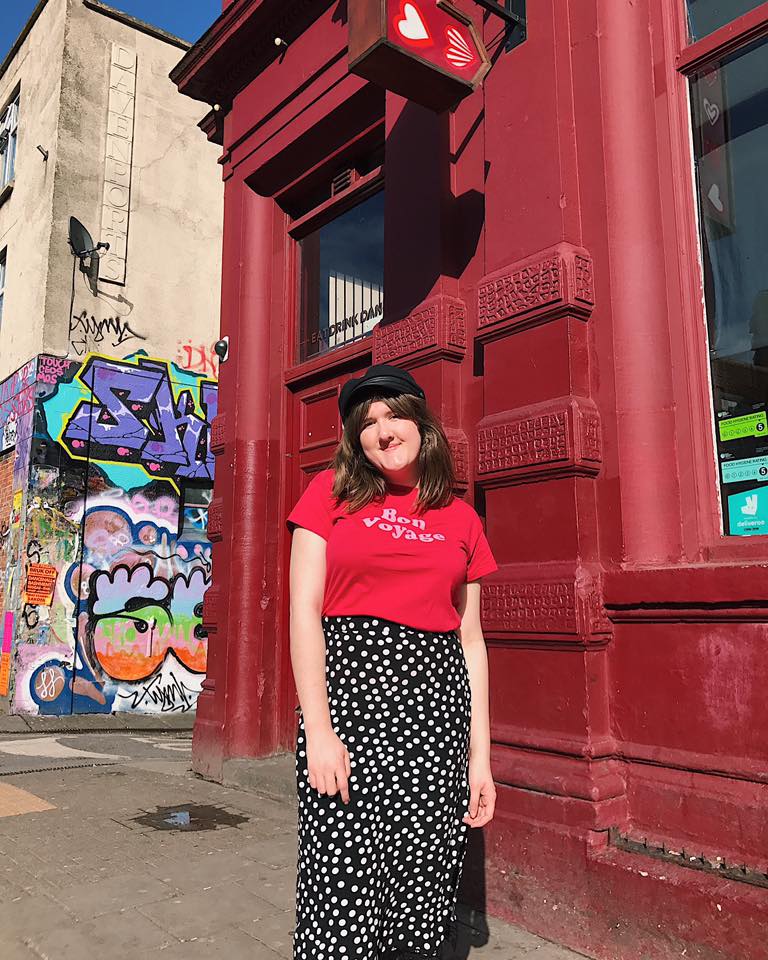 Tour life seems incredible to the untrained (read: non-musically gifted) eye, but it seems the negative parts involve the fact that once you reach a new city, the wanderlust in you just wants to explore, but time means that there’s never quite the chance to do so. “On tour, we’re constantly moving between places, which isn’t fun. I do love those slim chances we do get to walk around! On this tour, we walked around Cambridge, York and Liverpool- so I got three in!”

Another thing that (clearly my best pal) Sarah and I have in common, is our shared love for Brit musical twins, Ward Thomas. Country sweethearts bringing my favourite genre to British soil, I interviewed the pair last year- which you can read here – and it was a blast. Sarah has had the amazing opportunity of supporting the twins a few times, and has even worked with them writing tracks. “I love them so much! They’re so funny.” Sarah smiles. “It’s really funny because one of the first big gigs I did here was opening for them on five dates two years ago. It’s just been so fun watching their career blossom! They have amazing sister harmonies.” 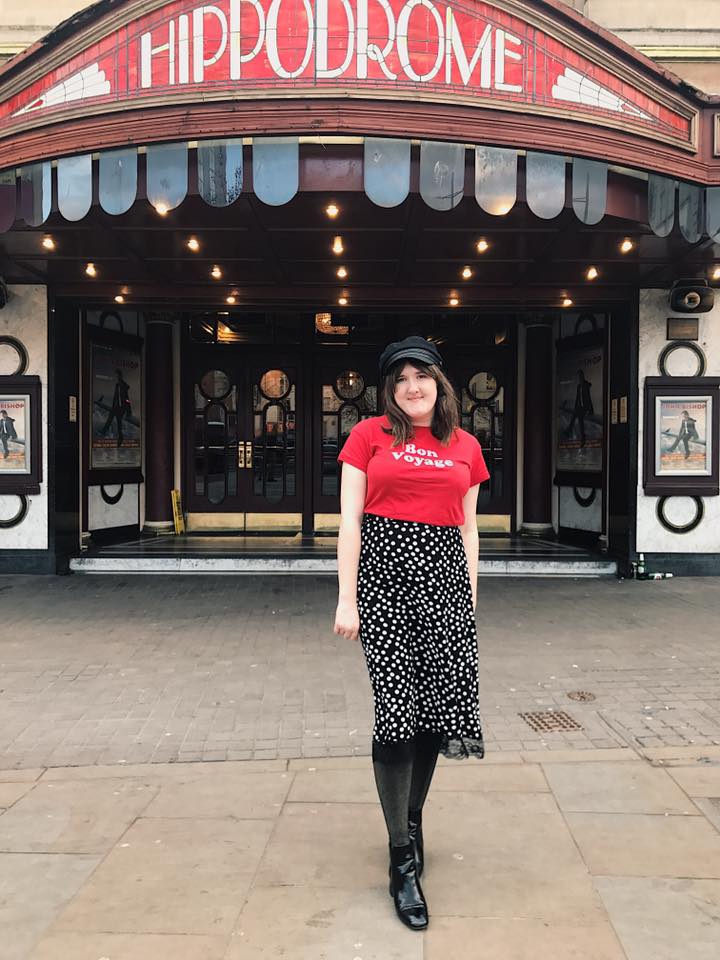 Another woman with an amazing talent is Sarah Darling herself. Lyrics brimming with magic, wonder and true stories, Sarah has a storytelling way about her that makes any live audience feel the power of her words. I asked Sarah all about her songwriting process and where she finds inspiration, and she had some golden nuggets to share. “I’m very inspired by landscapes, so travel inspires me a lot. It’s unfortunate that when I’m driving I have these ideas popping into my head and I’m like, ‘oh God, I’ve got to remember that now!’- somewhere beautiful always inspires a song.” One of her biggest hits to date, Home to Me, which saw Sarah spiral into the charts over in the US, takes inspiration from beautiful states in America throughout the song.

And as for the storytelling element to country music, Sarah knows a thing or two about that. “Most of what I write are true stories.” Her latest song, Wasted, is about a very personal story. “It’s a song I wrote 10 years ago about a family member who was going through a tough time in her marriage because of addiction. She felt invisible, so I brought her story into the world with my song, and now it’s a lot of people’s stories.” 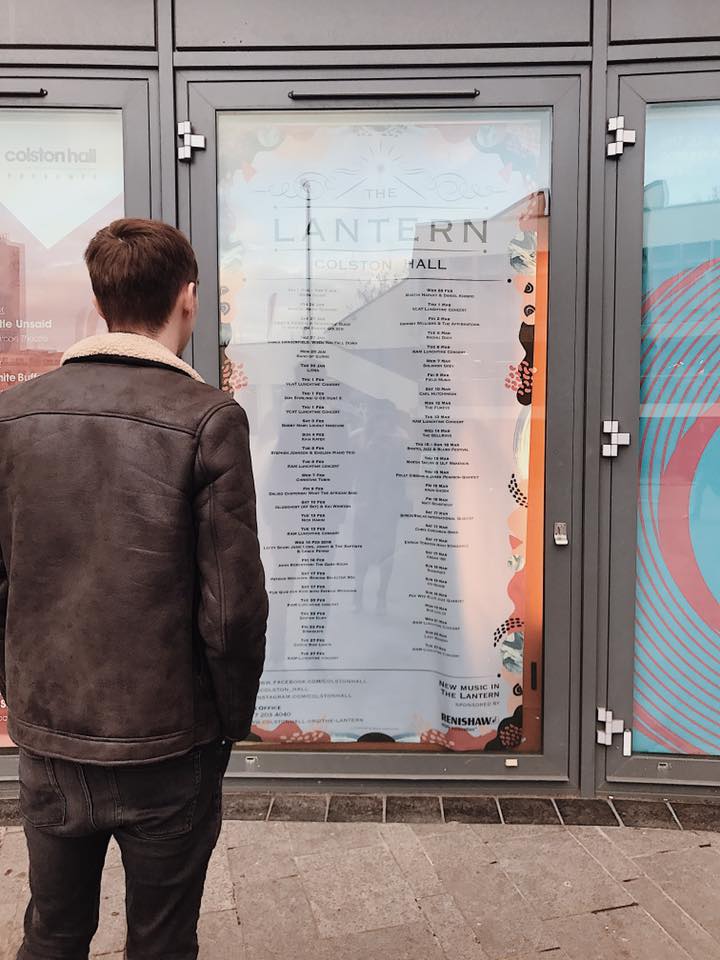 The boyfriend outside Colston Hall bc why not

The storytelling element to country music is something that makes the genre so downright special. And this is why more people need to get on board with this music. It’s true that it’s a niche genre in the UK (even though it deffo shouldn’t be) and so I asked Sarah if this is something she keeps in mind when writing- whether she throws in elements of pop to get new listeners on board. “I’m hopefully releasing a new album in October that definitely has more elements of pop. With Dream Country (my first album) it was definitely ethereal country with strings and country melodies, but now I’ve added more pop into my new songs.” Sarah was quick to assure me that not all is lost on the country front, though! “But it’s not bubblegum pop- it’s a different type. It’s good that I have the sort of freedom to add those sort of things and experiment to see what it sounds like!”

The freedom Sarah is talking about is a big leap she took: she decided to part ways with her record label and begin to self-release her own music. This is a major step for an artist in gaining back creative control and integrity of their own work, but it’s definitely a gamble to go ahead without a record label’s team behind you. I asked Sarah if this is something she’d recommend to a new artist starting out. “I think there’s pros and cons to both sides but I think the reason why I decided to part ways with my record label was to make a body of work that I was truly fulfilled by. When I made Dream Country, I had no expectations of what it would do. But it’s exceeded every expectation- and in a way, it’s connected me to those listening more, so people know who I am in a way they’d never have heard of previously. It’s exciting!” 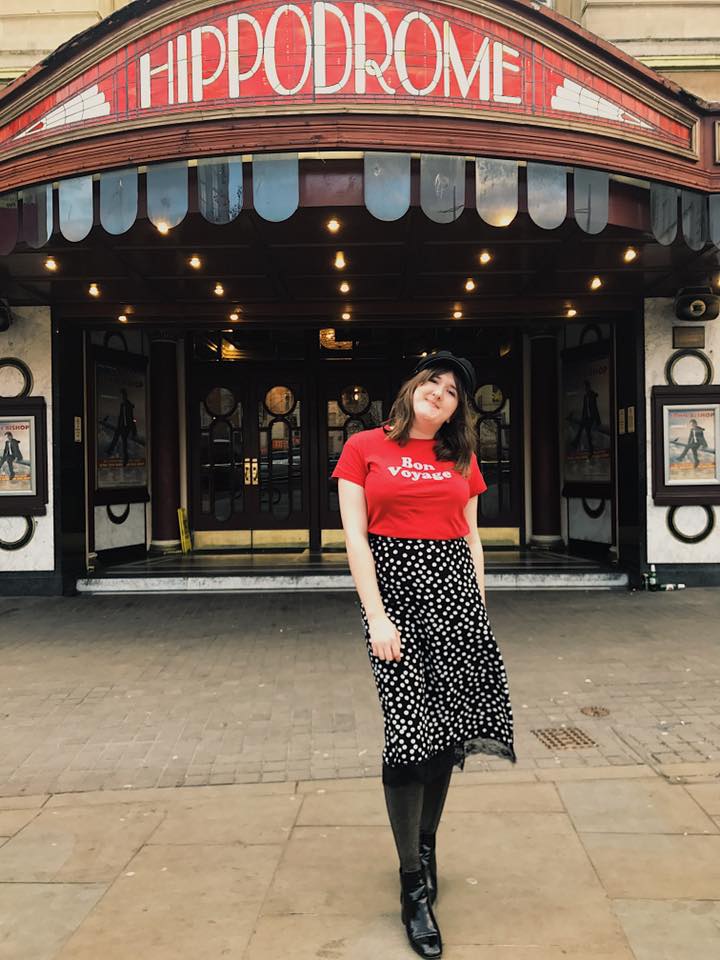 I know a lot of aspiring musicians- my boyfriend included. And seeing as he’d come along to help me interview Sarah, I thought I’d throw in a question about musicians starting out to see what advice Sarah could give me. And she had a ton of amazing tips. “My advice for anyone that wants to get into music is to be in love with it, always follow your own route and don’t try to be anyone that you’re not. I think that following your instinct is important.” But Sarah knows the route to knowing your true self is a windy one. “I had a lot of people telling me what I should do when I first started out and I actually did go along with it for a while- but I think that’s all part of the journey. My biggest advice is to just trust your instincts and go with it!”

It’s great having Sarah on UK soil, getting larger audiences engaged with country music. And I was glad to hear she was loving the UK too! “I find there’s something that’s happening in the UK that I really connect with. I feel very appreciated on stage when I’m telling my stories- with UK audiences I think there’s a real appreciation for the storytelling ability that I feel Nashville breeds.” 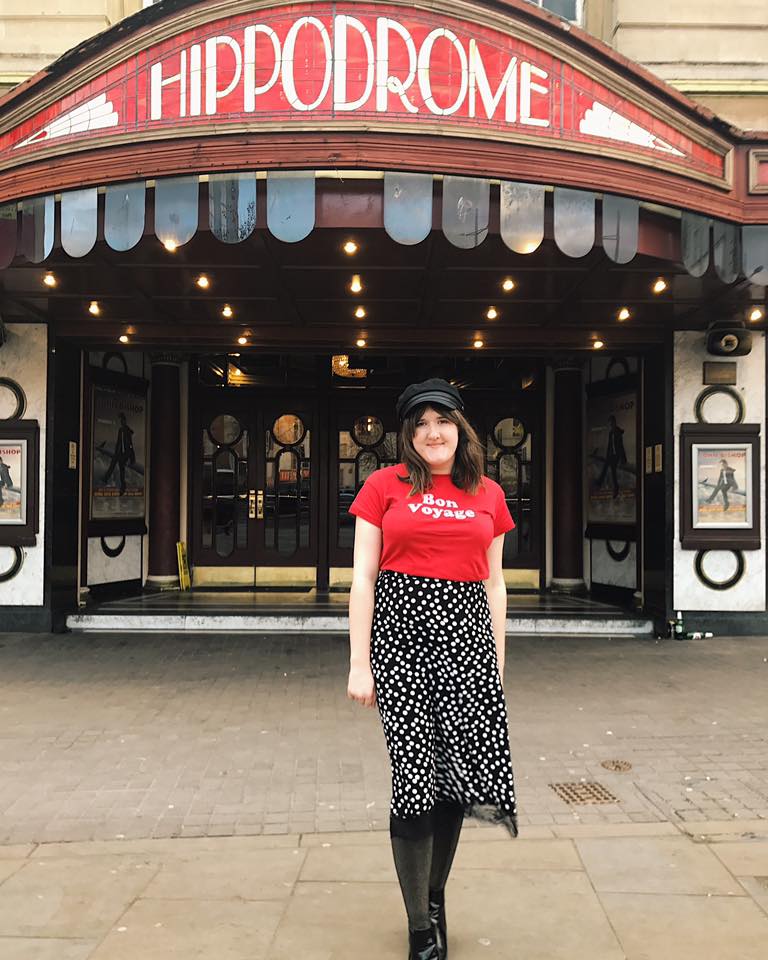 The rest of 2018 sees Sarah a v busy woman. As soon as she arrives back home in Nashville, she’s planning on getting her head down and stuck into writing. “I’ll be working on a new record, which is great. And hopefully we’ll do some more touring and will be back here in the fall!”

On stage in Colston Hall later that evening, Sarah took us on a journey to Nashville, where the pace of life is slower, people can take a breather and daydreams about life and its beauty are everywhere to be found. Sarah Darling has the voice of a literal angel, and her storytelling ability means I predict only brighter and bigger things are coming very soon for this Nashville star. 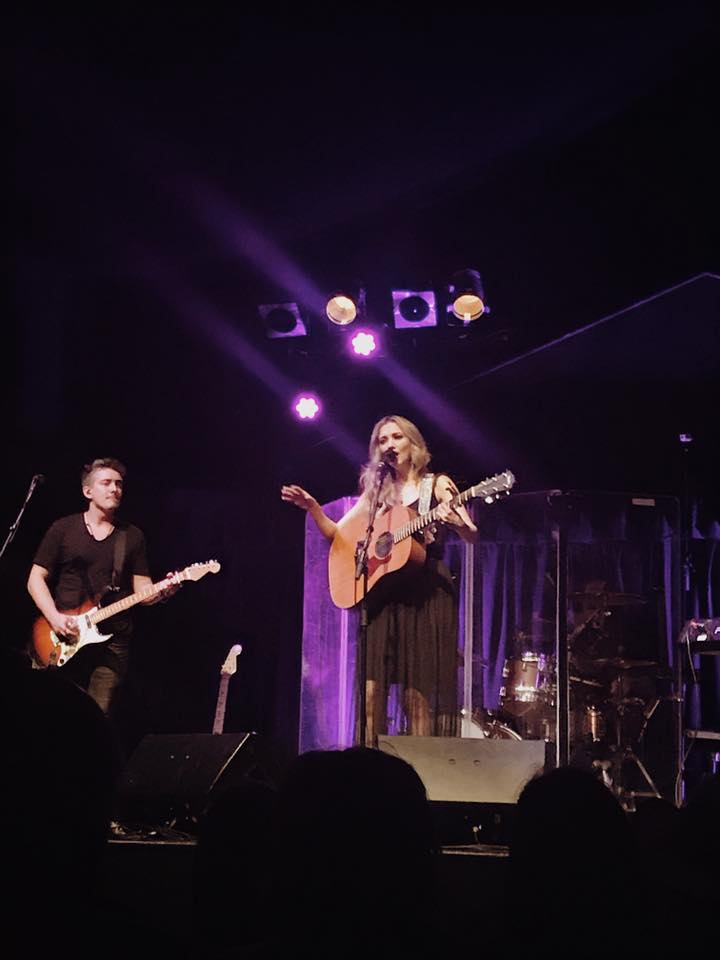 Sarah on stage later on in the eve!!!

If you fancy listening to the full interview with Sarah, finding out everything from what part of being a musician she loves the most, to her pre-show rituals, you can check out my Mixcloud below!

Follow Sarah on social media for all upcoming musical news and tour dates!

What you might expect at @opry Country Classics tomorrow night at the @theryman!! I’ll be singing a favorite @alisonkrauss! She’s the queen.✨

I’ll see ya next Tues for another post x

Calling in spring – dressin’ for the occasion