Breakin' Down Society's Bullsh*t
Anyone got any confidence lying around? ‘Cos I could use some
Hustlin’ kindly: Juggling full-time + freelance
I’m an aspiring journalist. And I’m questioning my faith in journalism now.
FIRST LOOK: Tame Impala’s new album (before it’s out oot oot)
Slow fashion advocates: Here’s 1 thing you forget about fast fashion consumption
Rediscovering a forgotten love for Birmingham – thanking you, Mercure Hotels
My 2020 vibe: Some gentle aims for the year
10 ways I’m stopping myself feeling blue this January
Living with Grief: 4 years on
Get to know Bristol (literally with me, I’m still new here)
My 2019 FAILURES
Everything that no one actually tells you about life after graduation
My lil Bristol flat (+ thoughts on life after uni)
Hiya! It be a new Madeleine Mae
Battle of the Jumpers: Keepin’ Cosy this Winter
Meeting: Lewis Capaldi
Paris | Snapshots of our Travels
Hey, BooLifeStyle

Oh how time flies- and it feels like years instead of weeks since I was in sunny Lanzarote, explorin’ the tiny lil island. However, today I thought I’d reminisce and throw a whole loada travel and fashion inspo into a post allll about a beautiful resort on the island, Playa Blanca. 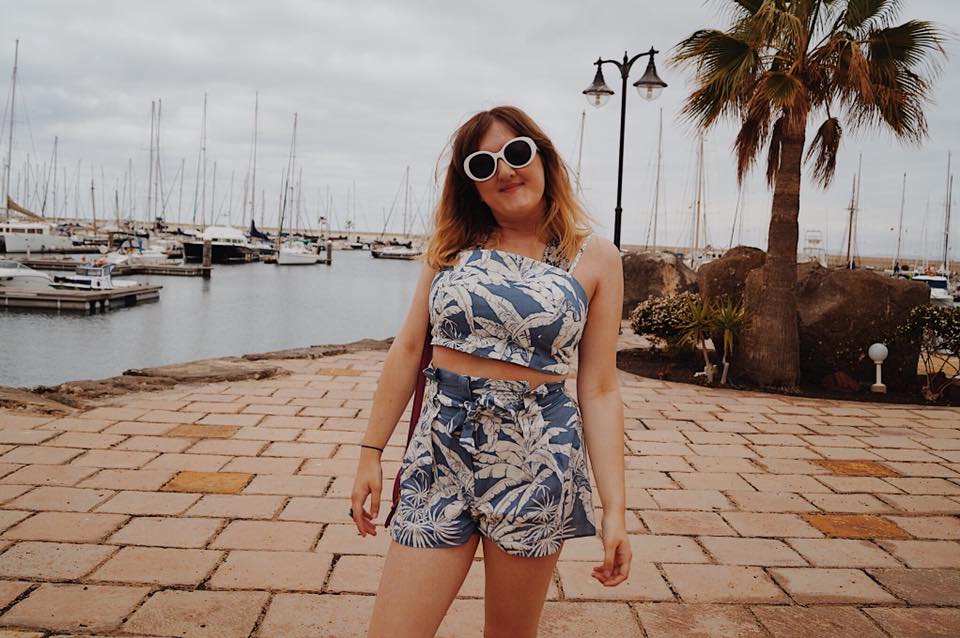 Dese pics be comin’ to ya from Marina Rubicon! 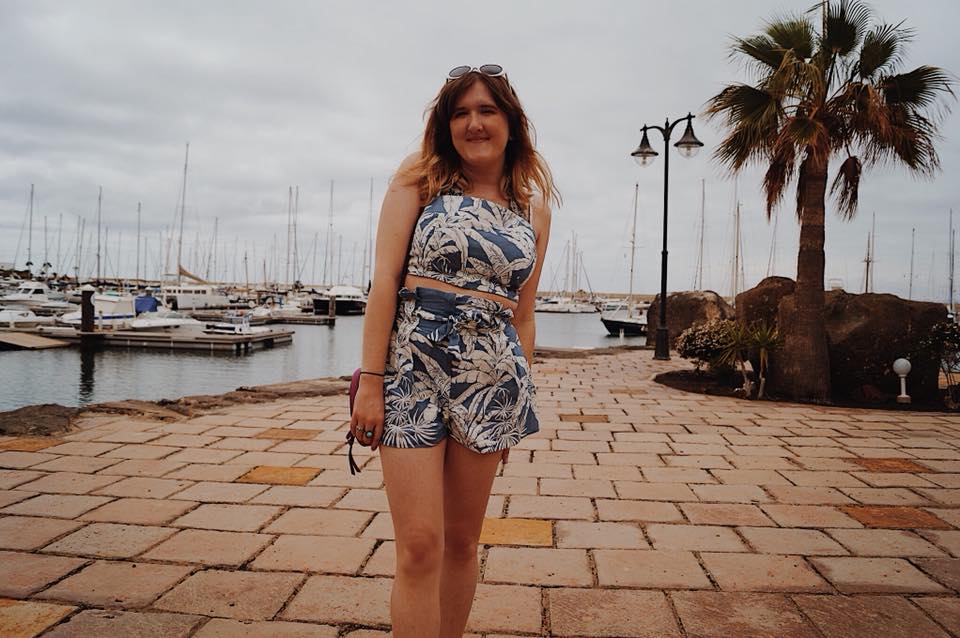 When myself and my boyfriend are away on holibobs, we abso love the chance to lie by the pool being lazy lil things. However we also love to get out and about and explore the country we’re visiting. I love being on the go all the time, and although I savour my moments of quiet on holiday, it does drive me just a bit barmy to spend a whole week doing absolutely nowt. 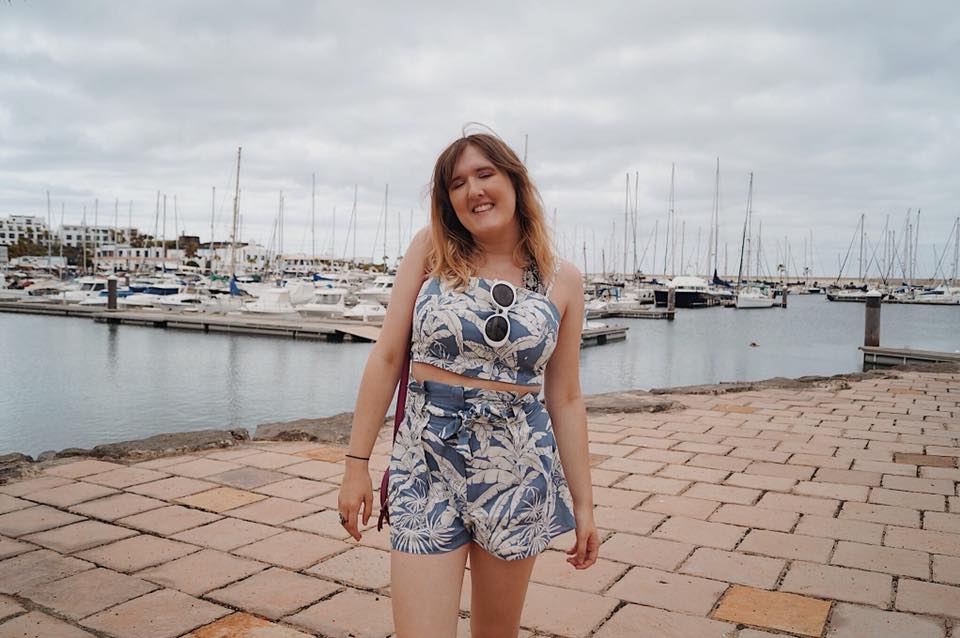 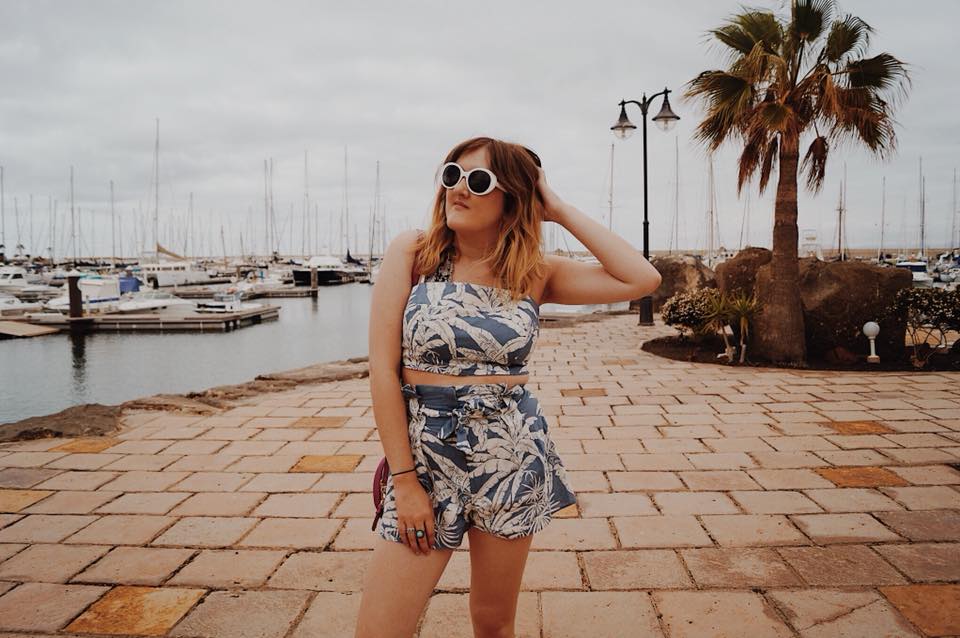 So this holiday, we hopped on a coach and visited the beautiful resort of Playa Blanca. The day was absolutely bakin’, although there were some grey clouds that floated over us a lil during the morning of our visit, but all in all we had a fabby day. Not to mention the fact that I was wearing the first co-ord I have ever invested in, and I was feelin’ maself. But more of that later. 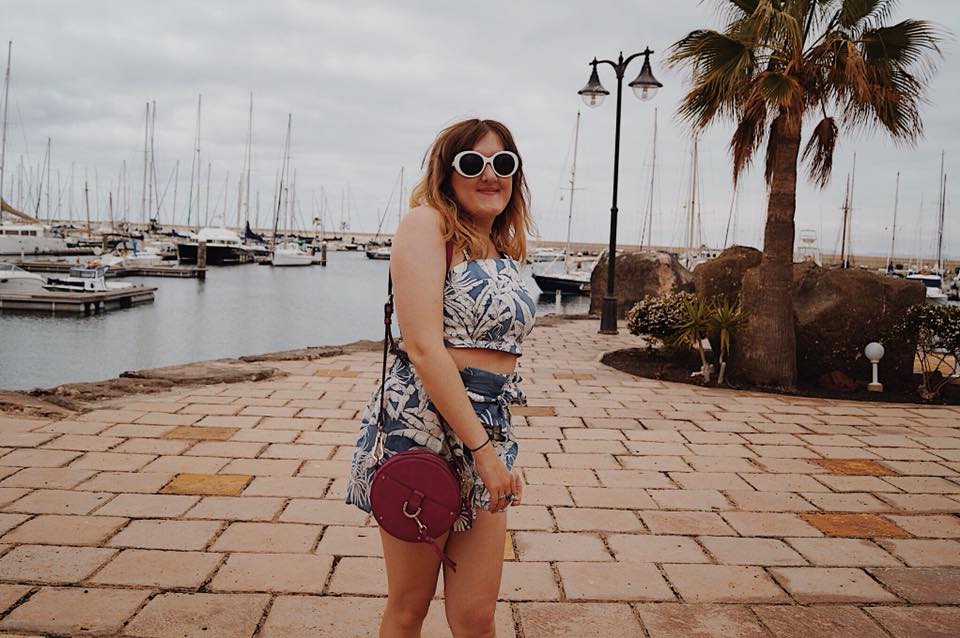 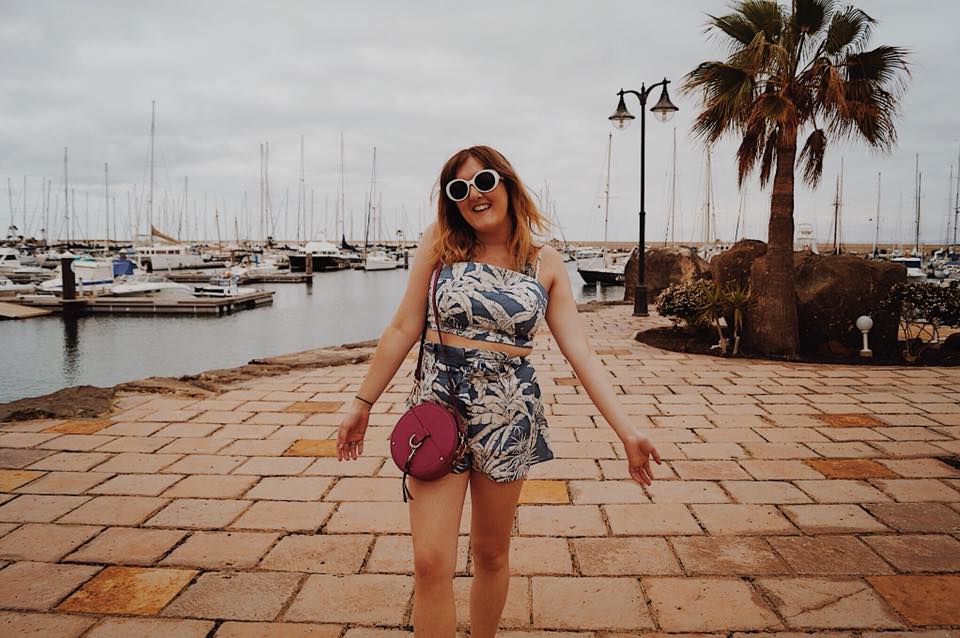 Onto the lowdown of all things outfit deets, travel info and many a beaut pic of our day exploring: 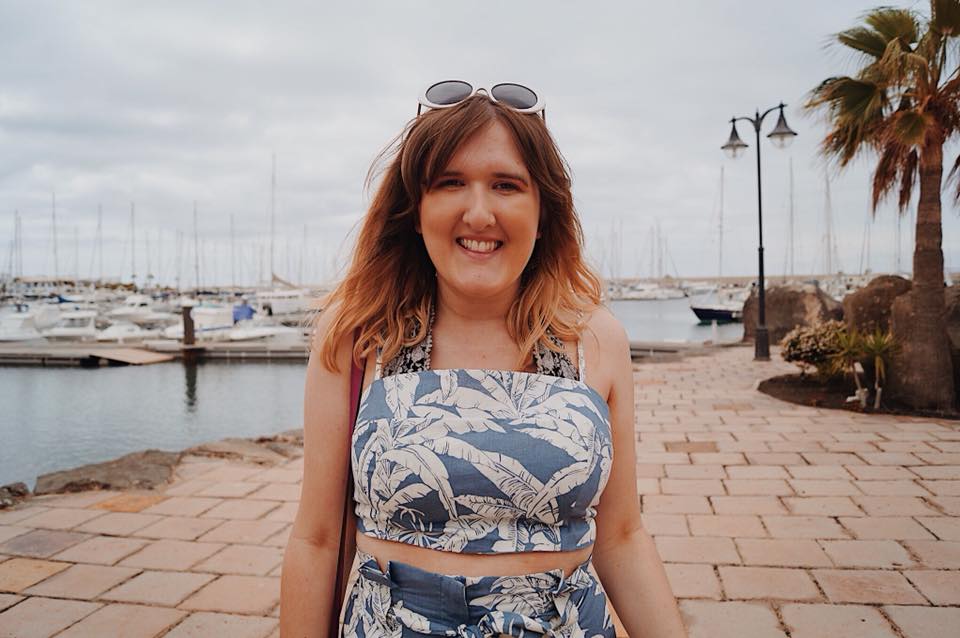 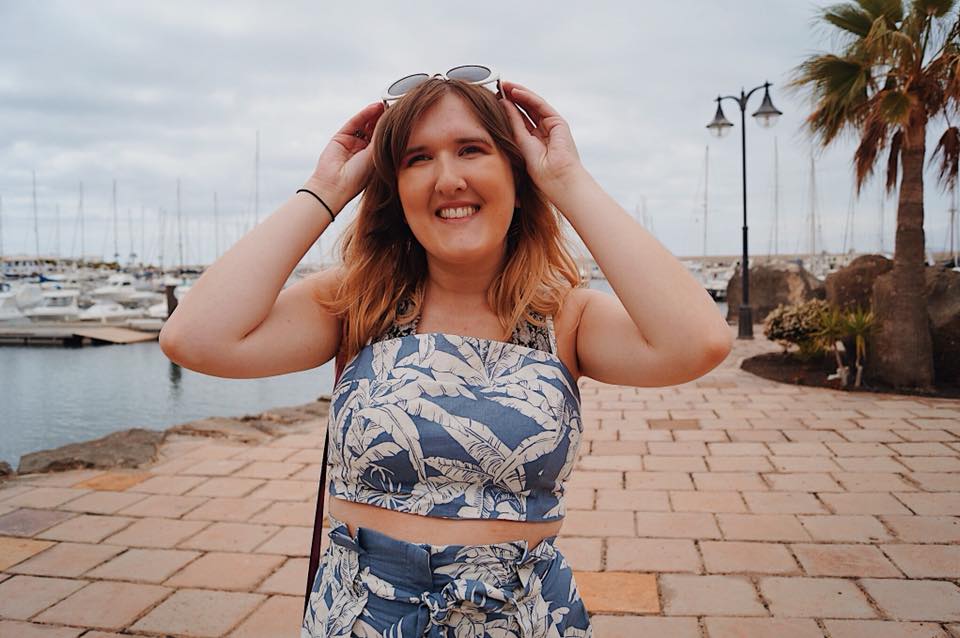 Who we travelled with

If you find yourself in Lanzarote any time soon, make sure to check out First Minute Transfer. This super affordable and super helpful transfer and excursions company (also sometimes referred to as Last Minute Travel) has a super easy to navigate website where you can prebook transfers and excursions before your hol, and they also have excursions shops pretty much everywhere you turn in the big resorts in Lanzarote.

There’s a shop literally across the road from our apartment over there, which made it super easy for us to pop over and book a trip for literally the next day. As we were there in June, we were lucky to choose exactly which trip and day we’d like to go, but I’d advise for the busier summer months to plan ahead and book before or at the beginning of your holiday so you don’t miss out!

We booked the tour of ‘Playa Blanca Market’, which costs just 15 euros per person. The bus picked us up promptly at around 8:00am in the morn (so a pretty early start for holidaygoers, but worth it) and dropped us back to our hotel at around 5pm in the eve. There’s a super helpful English speaking guide on the bus, who explains everythang and more on the way down to Playa Blanca, and once you arrive at your destination you’re free to roam by yourselves until it’s time to head home again. 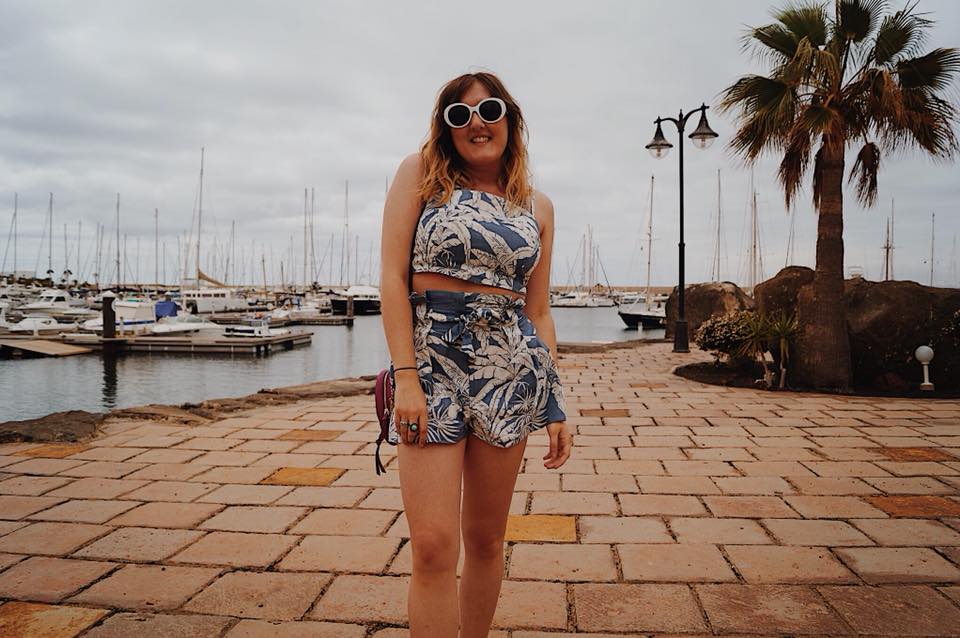 After arriving in the south of the island, we visited the modern port of Marina Rubicon, enjoying some free time in this wee beauty of a place. Then we hopped back on the bus to visit the port of Playa Blanca, the village and the jawdroppingly stunning coastline. 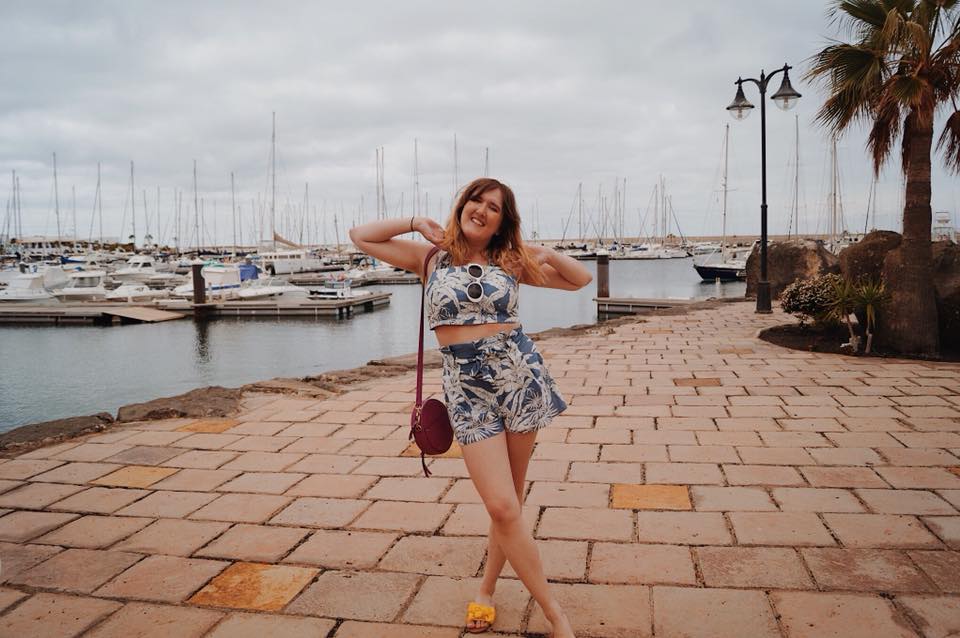 Marina Rubicon: what to do

This beeeautiful lil port has a lovely lil market on Saturdays, which winds its way through the cobbled streets. My advice: get there before lunchtime to have a wee peruse, because as soon as people get hungry, they’re up and out, meandering the market stalls- which makes getting out of the market hella tricky with all the crowds.

You’ll find anything and everything on sale at these markets. Stunning handmade jewellery- often of which you’ll see being made by the market sellers right there and then- Moroccan rugs and cushions, scrummy food and, in our case as it was June, World Cup memorabilia. It feels so authentic and exciting to wander the streets watching market sellers hone their craft and tourists lapping up the atmosphere. 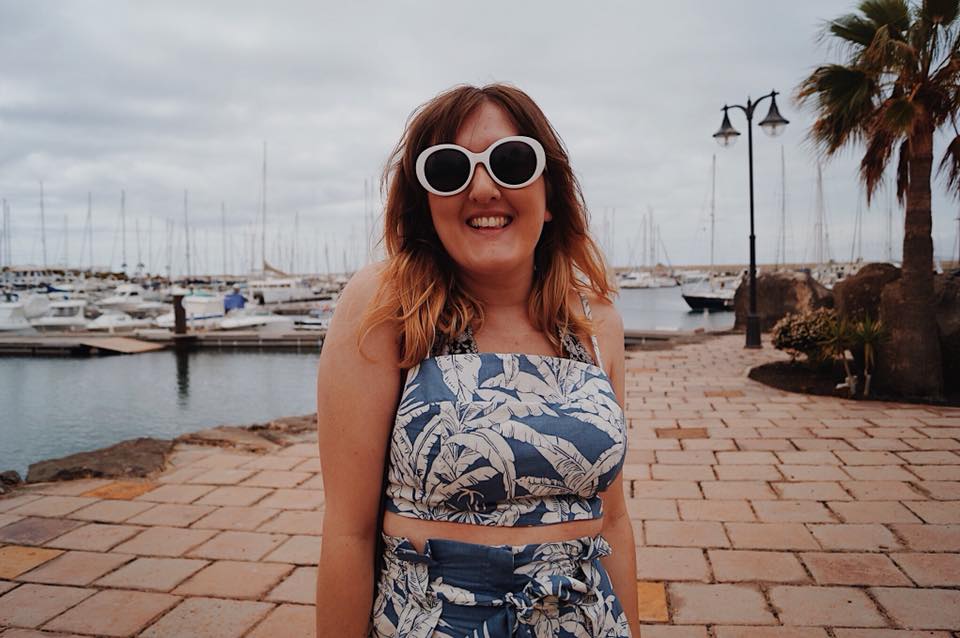 Set against a backdrop of the gorgeous port, with lil (and sometimes mahoosive) fishes lapping at the water, and boats bobbing up and down, this lazy morning strolling around Marina Rubicon really chilled me OWT.

Alongside the market shopping, there’s a mahoosive shopping centre with well-known brands; high street and high end. And for the (not so) faint hearted? Pop on down to the diving centre and go swim in the Museo Atlantico: the first underwater sculpture park in Europe. I can assure you that I did not set foot (or flipper) near that thing, but I can imagine it’s a bladdy amazing sight for the eyes- if you’re less of a wuss than me. Marina Rubicon: where to eat

Along the port, facin’ the lil boats bobbing on the marina, and the vast expanse of the ocean that extends across the horizon, there are a few adorable restaurants, bars and cafes to look out for. I cannot for ze life of me remember the joint Sam and I visited for an orange juice and brunch, but it was lovely. We sat, sippin’ away and looking out across the sea, the sun glistening on the water, and it made my morning. Chilled factor 3000, me thinks. Marina Rubicon has a lot less choice than Playa Blanca when it comes to eating out, but there are still plenty of cafes and restaurants to choose from, with varied options, and the fact that it’s a lil quieter gives it a picture postcard authentic Spanish feel. It’s wonderful.

Playa Blanca: what to do

Once we hopped off the bus at Playa Blanca, we were greeted with mile after mile of beeeautiful sandy beach. Golden sands and lapping waves drew us closer, and we spent the majority of the afternoon sunning it up on the sand. You’re spoilt for choice with beaches in Playa Blanca, and they all have a spectacular view of the mahoosive port, where you can watch everything from cruise ships to lil sailing boats popping to and from the marina. And some of these ships are abso giant- it’s v excite to watch, I tell ya now. And the icing on the cake in Playa Blanca are the hilariously tacky yet wondrous treasure troves of souvenir shops that line the seafront. I managed to pick up a disgustingly neon kiddie ball for less than a euro to play catch on the beach (we kids at heart, don’t judge) and there are actually some beautiful souvenirs to be found if you hunt them down. There’s even some department stores, selling everythin’ from your fave perfume to Raybans- all discounted because they’re in euros; snap ’em up while you can, I say.

Playa Blanca: where to eat

Scattered across the strip that faces the ocean are an absolutely delightful selection of eateries to get your hunger fixed in Playa Blanca. It took us a solid half an hour strolling back and forth to try and decide exactly which restaurant we wanted to eat at. Again, probs due to my mammoth hunger and hurry to order pronto, I can’t remember the name of the restaurant we chose to eat at, but mark me words, if you pick one that faces the beaut ocean, you won’t go wrong. Aaaand this set o’ pics be coming to ya from Playa Blanca!

We munched on baguettes and sipped on cider as we watched the boats bobbing to and from the harbour, and relaxed as the waves rolled into the shore. It was d i v i n e. Relaxation to the max.

What would a ‘holiyay outfit diaries’ post be without the outfit? For our trip to Playa Blanca, I popped on my beloved New Look co ord that I picked up specifically for me holibobs. I’ve never invested in a co ord before, purely because they’re quite the investment to make in one purchase. It’s hilarious, because I undoubtedly spend a ridiculous amount of money per month on clothes, but for some reason, purchasing a co ord in one shop feels rather pricey.

But I’m so glad I did it, because these babies can be worn in so many different ways. Together, and apart. The beautiful sky blue shade mixed with the colour of the summer season, not white- but oatmeal, are the most perfect tones to go alongside a developing tan. I wore my trusty summer hat for protection, with my big ol’ Primark sunnies (v designer-esque but actually just a quid) to accessorise the outfit off to a tee. And on my feet, I slipped on my H&M, as yellow as the sun on a good day, sliders.

This co ord was actually cheaper than most I’d come across, and it’s such a versatile lil outfit. I’ve since worn the top with white skintight trousers and summery skirts, and have tucked a white tee into the shorts. The top has the most beautiful bow tie detailing to the back which is so flattering, and the paperbag waist shorts nip you in in all the right places, so yes, that’s also flattering too. Well done, New Look- you kitted me out well.

I hope this wee post has brought some summer sunshine to your day, even if the sun isn’t shining so much over in the UK at the moment – pleeeease tell me we haven’t lost this heatwave for good, please?!? I’ll be back with another post next Tuesday- and another instalment of the ‘holiyay outfit diaries’ will be sure to come soon, too! x Anyone got any confidence lying around? ‘Cos I...

Get to know Bristol (literally with me, I’m...