Breakin' Down Society's Bullsh*t
Cut the grad some slack
20 positive things I’ve learnt since 2020 hit us
Things you’re allowed to feel during the Coronavirus outbreak
Every reason why you gotta visit Bristol
Anyone got any confidence lying around? ‘Cos I could use some
Hustlin’ kindly: Juggling full-time + freelance
I’m an aspiring journalist. And I’m questioning my faith in journalism now.
FIRST LOOK: Tame Impala’s new album (before it’s out oot oot)
Slow fashion advocates: Here’s 1 thing you forget about fast fashion consumption
Rediscovering a forgotten love for Birmingham – thanking you, Mercure Hotels
My 2020 vibe: Some gentle aims for the year
10 ways I’m stopping myself feeling blue this January
Living with Grief: 4 years on
Get to know Bristol (literally with me, I’m still new here)
My 2019 FAILURES
Everything that no one actually tells you about life after graduation
My lil Bristol flat (+ thoughts on life after uni)
Hiya! It be a new Madeleine Mae
Battle of the Jumpers: Keepin’ Cosy this Winter
Meeting: Lewis Capaldi
Music

Before we begin, let’s establish a little bit of context. Have a listen to this:

And, while you’re at it, this:

If you’re tempted by the irresistible fusion of classic funk guitar and rock and roll riffs that make up The Shakers’ distinct sound, you’ll absolutely love the band by the time you’ve read to the end. I promise the interview is full of all things weird and wonderful, such as a Prince/George Harrison super group, major improv when birthing their latest single, Brixton Kiss, and George Clinton’s mothership. Need I say more? I caught up with the band’s guitarist and synth player George Service, who gave me a run-down on who The Shakers are, what makes them so damn brilliant and why you should be listening to them. 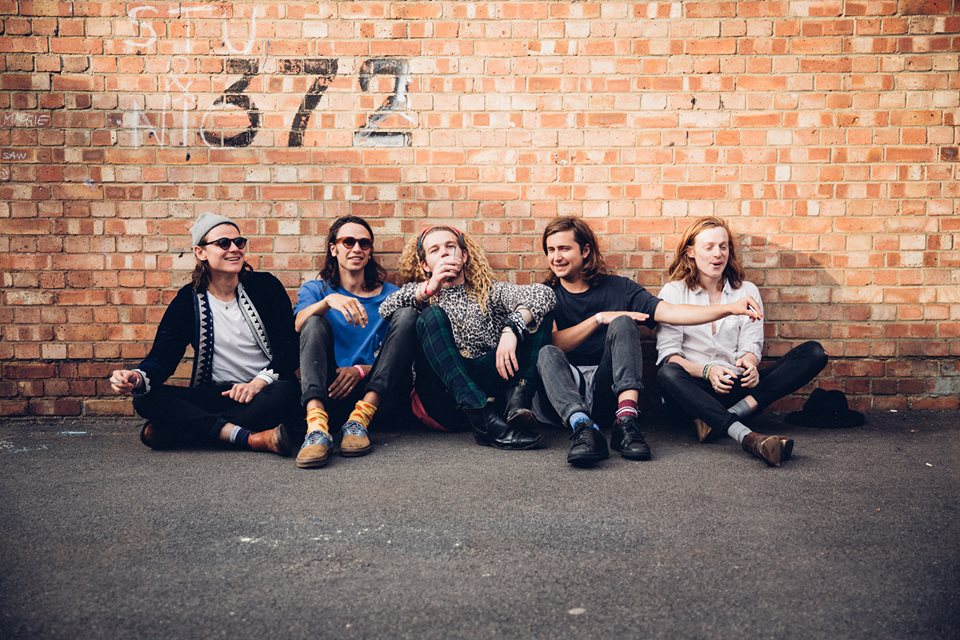 ‘Bringing some sunshiney vibes to the greying dullness of East London’, The Shakers are quite simply ‘too much fun’. A bunch of long-time friends, The Shakers comprises of vocalist and guitarist Jack Hawkins, my fabulous interviewee, guitarist and synth player George Service, drummer Matthew Wright, bassist Charlie Gardner and guitarist Christian Spruit. George takes me right back to the band’s roots when he explains that ‘we‘ve been friends for a long time. The bass player and the guitarist are cousins, me and the drummer used to do karate lessons when we were like 8, and then the guitarist and the bass player went to school together. We all lived together at uni and then moved out into a house after that. We’ve just been hanging about, causing trouble ever since.’

Having fun and hanging about is exactly what makes The Shakers who they are. Their latest single, Brixton Kiss, has a sense of 60’s nostalgia to it, which sets the band apart from the competition; their tracks are infectious to the ear. When asking how the song came about, George gave me a slightly surprising yet typically Shakers-style anecdote about Brixton Kiss’ unconventional birthing: ‘So, we were all standing in a queue for a club and it was just as we’d formed as a band. We got talking to these people in the queue, we told them we were in a band and then they wanted to know what we’d written. We had to kind of make up on the spot this bass line we were working on.’ As messy as that start sounds, Brixton Kiss is something that was a long time in the making and a song that really speaks to what the band were feeling at the time. ‘We started the bare bones of Brixton Kiss ages ago. It progressed into something that shows the place that we all were in, at a time in our lives where we didn’t really know what to do. A lot of our friends were being pressured to get an actual job and move on, but we just wanted to stay out and party. It’s about going our own way and cutting our mark in the sand; saying this is who we are and this is what we wanna do.’ 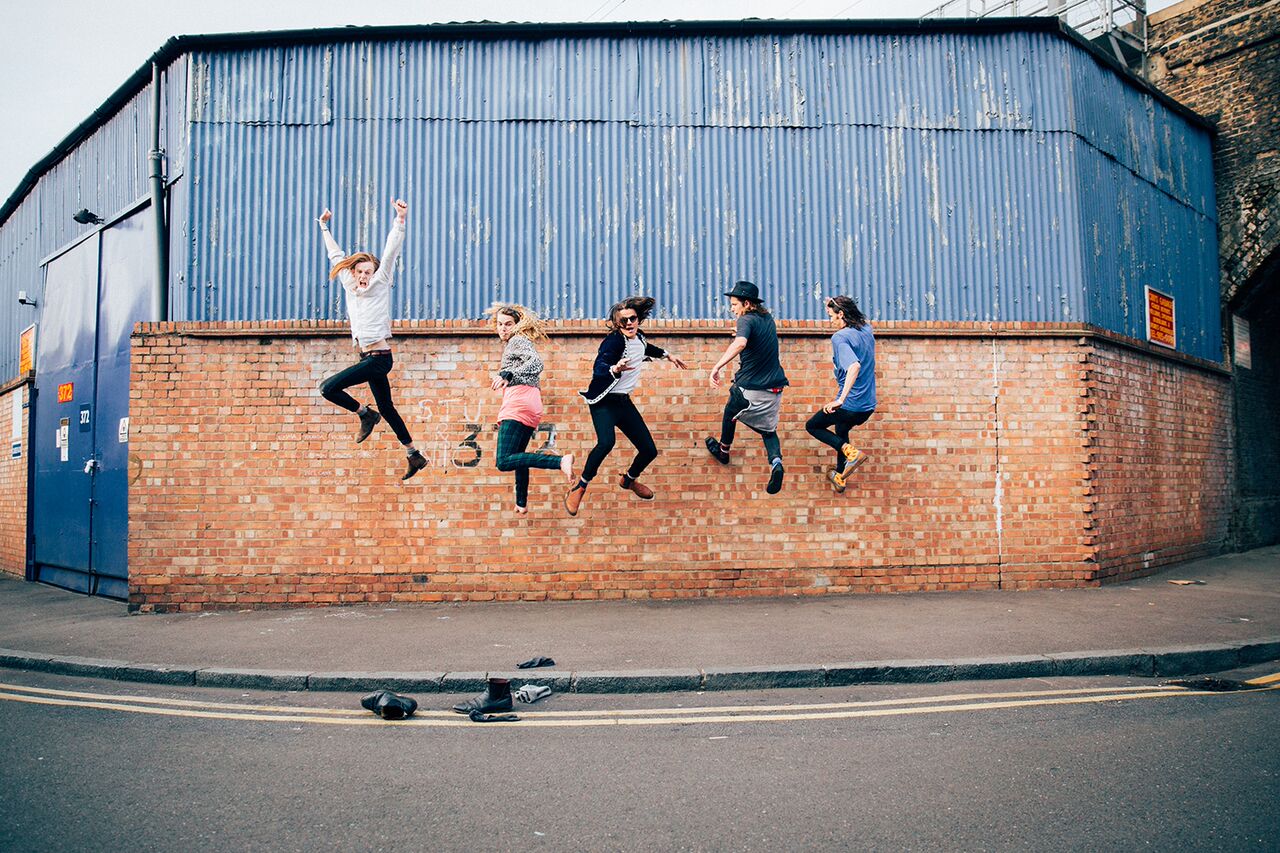 There’s something refreshing with The Shakers, in that they write purely about the everyday. This is hugely important to the band: ‘we are who we are. Everything we try and write about is where we are in our lives, what we’re doing and what we believe in.’ Although The Shakers are all about the fun factor, they really are serious about their music. ‘If you’re a songwriter and you’re singing about something that you’re not actually involved with, then no one’s going to be able to connect with your songs; no one’s going to believe that your heart’s in it. When we’re on stage performing it means that people can look at us and be like ‘these guys are really meaning what they’re doing’ and that’s important. People can really jump on board with it; if they’re on the same level as you it’s going to be a much more truthful and honest performance.’

“Our lead singer always wears a different dress when we perform, so you can expect questionable outfits”

Previous songs such as Tough Growing Up and Kiss Tracks document the lives of these guys as they’re working out who they want to be in the cut-throat world of the music business, whilst also retaining that ‘too much fun’ element that George self-consciously admits. This element definitely translates into the band’s live performances. I asked George to define a typical Shakers-style performance and I was in for a treat: ‘our lead singer always wears a different dress, so you can expect questionable outfits. We also play with a saxophonist and we have a girl on keyboards, so we’re a big stage crew- we always get the crowd going. We try to just bring as much fun and a really good vibe to the whole performance as much as we can.’ 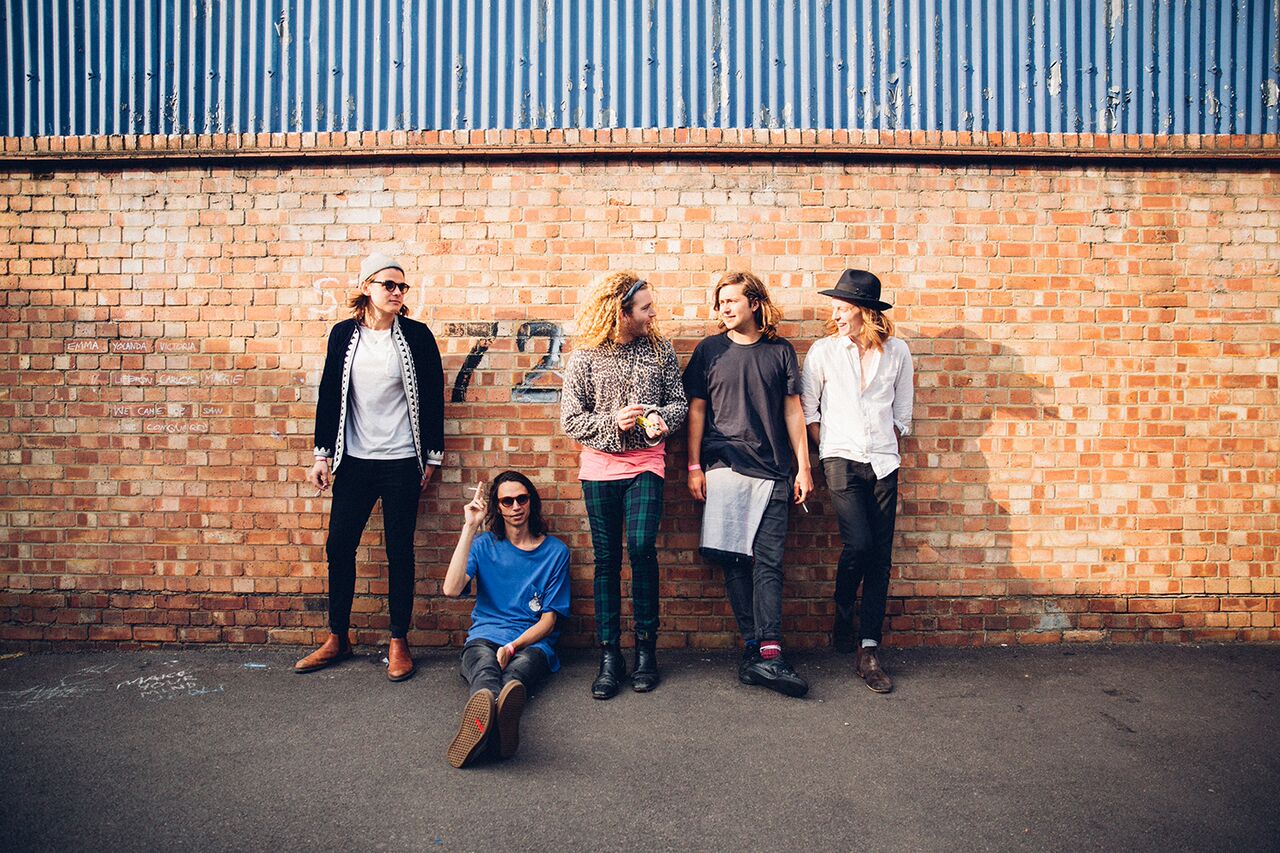 The Shakers bagged themselves a spot on the line-up for good old Glasto last year, and George is quick to say that it’s been his favourite gig so far. A sea of 1,000 faces whilst playing Strummerville stage definitely has made it up there with The Shakers’ best moments. ‘It was the most terrifying and humbling experience we’ve ever had. It was awesome. We had this one moment where one of our songs breaks down – everyone in the crowd suddenly crouched down really, really low. When the song dropped back in again, everyone jumped up into the air and started dancing. When it happened we were all just kind of like ‘did that really happen?!’ You only ever see that happen when you’re watching massive bands.’ At the time of speaking to George, the band are still buzzing about a gig they did the night before. ‘We managed to sell out last night one of our favourite venues, The Half Moon in Putney. That place is really important to all of us so that was really, really cool.’

The Shakers are clearly so passionate about what they’re doing. The band take inspiration from a dazzling array of musicians, including Red Hot Chili Peppers, Mac DeMarco, The Virgins, and of course, The Rolling Stones. However, although heavily distinct, The Shakers’ sound has evolved as the band have progressed. ‘Our first EP was quite an indie kind of deal and then with this second one we’re putting out at the moment we’ve definitely mixed things up. We’ve got a producer who has a background in a lot of funk stuff, so there’s a lot more funky lines and some real good guitar licks; we’ve just started using synthesisers, so we try and pull a bit more of a funk vibe to it. I think we’ve matured in our song writing too.’ And, in an oh-so-typically-Shakers way, George sums up the band’s evolution: ‘before we described ourselves as slacker rock, but now I guess you could say it’s Hendrix meets Mac DeMarco.’ 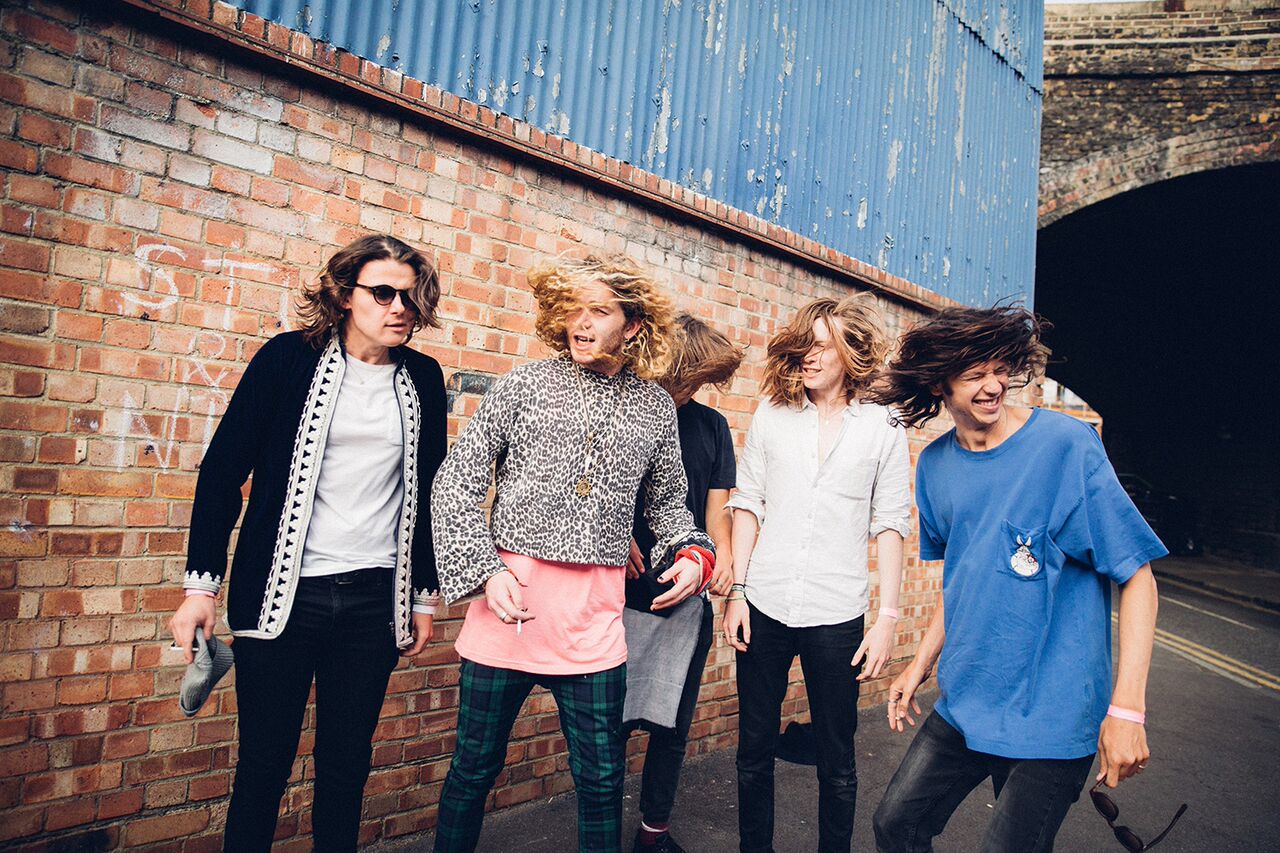 Have you ever seen such luscious hair tho

George naturally had a right corker ready when I asked him what his ultimate musical collaboration would be, the conditions being that he could indeed pick anyone, alive or dead. Somewhat excited, after having a second or two to think, he was ready with something that now that it is said, we all desperately want to happen: ‘we could play a supergroup of Prince, us and George Harrison playing While My Guitar Gently Weeps. Maybe with Bootsy Collins on bass. Bring a little funk to it.’ And in true Shakers style, George has it planned exactly how this collab is going to be possible: ‘George Clinton’s mothership can come down and beam us all up.’ Ever prepared for any situation, this band are.

“This year, we’re going to be putting out the rest of our EP, called Banana Tsunami”

As for 2017’s adventures, we undoubtedly have a whole lot more to come from The Shakers. ‘We’re going to be putting out the rest of our EP, called Banana Tsunami, we’re going to be doing a video, we’re hopefully gonna be playing a load of festivals in the summer and our next gig is part of Independent Venue Week and will be at the New Cross Inn, in London on 26th January.’ What a round up, eh. 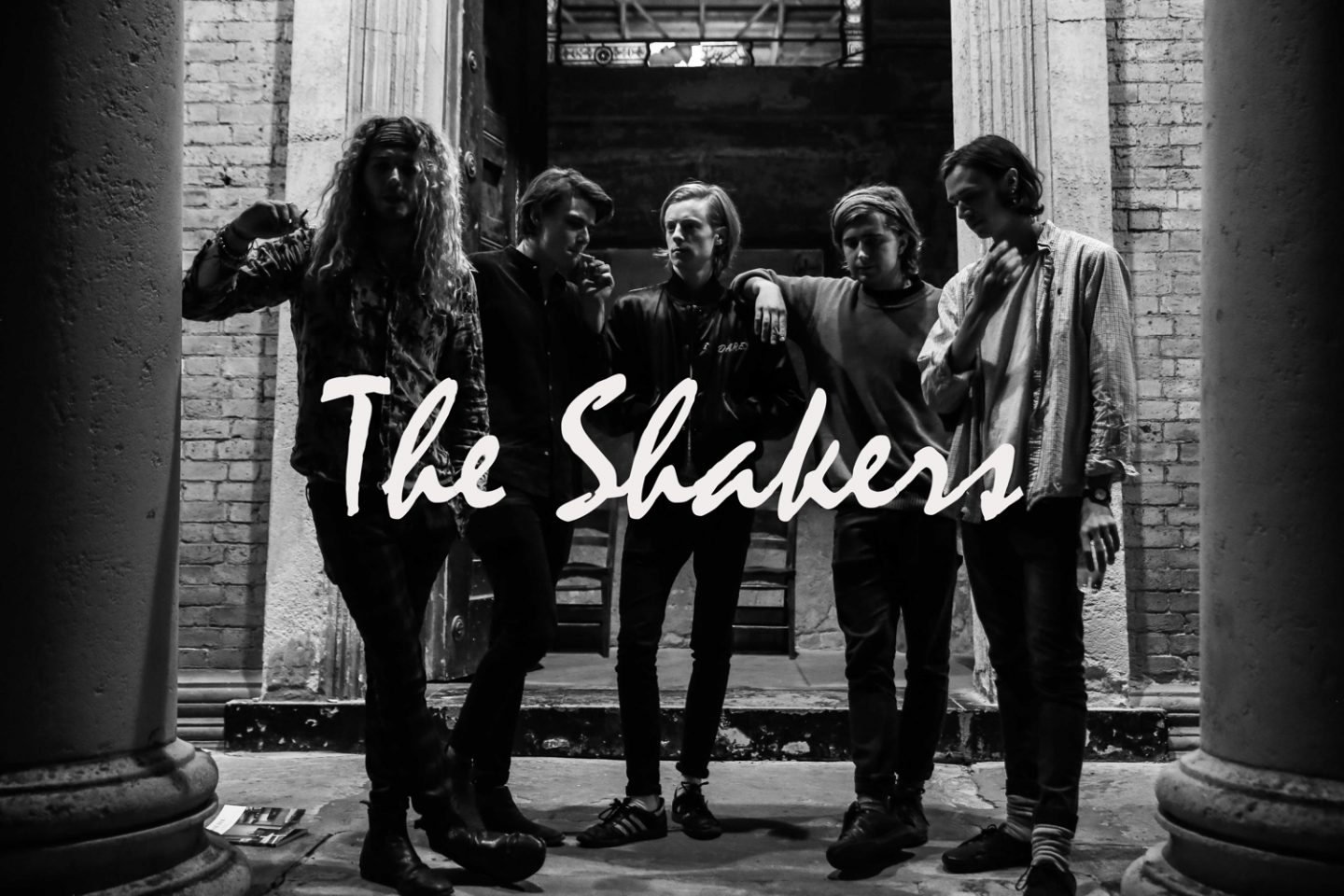 As we end our chat, George’s parting words are ‘Maddie, you are a goddamn dream. You’re a saint and you’re doing God’s work. I love it!’ Sneakily, I have a lil feeling this was flattery in order for me to write up a totally fabulous interview. George didn’t need to worry about that, because I have nowt more than good things to say about The Shakers.

Now hurry along and follow The Shakers on absolutely everything, to keep up-to-date with their latest releases and gig dates. My only warning, it may just be ‘too much fun’.

This time tomorrow we'll be returning to @HalfmoonPutney!

Posted by The Shakers on Thursday, 12 January 2017

The Truth About Uni